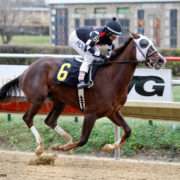 Dare To Dream Stable’s Graeme Hall filly, Sheza Super Star, made her debut a winning one in dominant style. Sheza Super Star broke out of the starting gate like a rocket ship and seized command of the race almost immediately. When the Michael Reavis trained entrant Give Me Mo Money engaged Super Star shortly thereafter, jockey Carlos Montalvo let that filly take a very small lead knowing all he had to do is ask his filly when it was time and she would respond. Once they reached the turn, Montalvo decided the time was “now” to force the issue. In a split second, the sharp-looking chestnut filly swallowed up Give Me Mo Money and shook clear midway through the bend to open up by 3 lengths. When they straightened for home Montalvo guided Sheza Super Star toward the rail while maintaining a safe advantage inside the 1/8th pole. It was now just a formality, as Montalvo continued on with mild encouragement to the finish with “The Super Star”, crossing the wire 2 lengths in front of Make Me Mo Money. It was a very professional and impressive first-time effort by the Dare To Dream Stable color bearer. Sheza Super Star was a private purchase as a yearling by Dare To Dream. She’s out of the multiple stakes producing Housebuster mare, Starbuster.

Congratulations go out to trainer Mike Stidham, who after winning the Fairgrounds training title last year, followed that up with being the champion trainer by earnings at Arlington Park this past Summer. Kudos to Hilary Pridham, Rigo Rojas, and the entire Stidham barn who all had a hand in Sheza Super Star’s path to victory! It also wouldn’t have been possible without the superb handling by jockey Carlos Montalvo. He has been working the filly since she’s been at Hawthorne and he has said since her first work that she could run. In the paddock before getting a leg up he knew he was sitting on the winner and rode her in that manner! Finally, congratulations to all the Dare To Dream Stable Partners who were treated to an early Christmas/Chanukah present with this performance!

Dare To Dream Stable Closes Out 2016 in Style!
Scroll to top