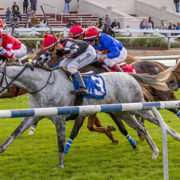 Dare To Dream Stable’s gutsy gray Gelding Jockamo’s Song once again showed his affinity for the bayou by winning a tough allowance sprint on the Fairgrounds turf course.   The handsome son of Half Ours broke well from his inside post with jockey Mitchell Murrill back in the irons.  Murrill put Jockamo in a great spot 3-4 lengths off the early speed.  He then steered “Jocko” out to the three path around the turn while steadily advancing closer to the leaders.  When they hit the top of the long Fair Grounds stretch & straightened for home, Jockamo inched past the leaders and had gained a length advantage at the 1/16th pole. The closer were charging hard at this point behind Jockamo, but Murrill kept busy on him and he held sway to the wire under strong urging to win it by a head.

Jockamo’s Song, a Dare To Dream Stable private purchase, caps off his 2016 campaign with his 3rd win of the season and 5th overall, one of those being a Stakes victory.  Jockamo also had two extremely close 2nd place finishes in Stakes company, losing both of those contests by less than 1 length combined. He closes the year with career earnings over $217,000 with more expected from him in 2017.  Congratulations to all the Dare To Dream Stable partners who have enjoyed a thrilling ride from Jockamo. He shows up to every dance and gives us his all every race.  Kudos to trainer Mike Stidham, Hilary Pridham, Danny Werre, Charlena Schenk Werre and the entire team who have done a fantastic job keeping Jockamo sharp & happy throughout the year.  Big thanks thanks to Jockey Mitchell Murrill as well, who fits Jockamo like a glove and rides him with a ton of confidence.

Dare To Dream Stable Closes Out the Year on New Years Eve With Two Nice Efforts.

Dare To Dream Stable’s newly acquired Tiznoble, who was claimed from trainer Joe Sharp off an impressive victory for a $30,000 tag last time, was immediately & ambitiously moved into Stakes company just 16 days later on December 31st in the $75,000 Woodchopper Stakes going one mile on the turf at the Fairgrounds.  Tiznoble rewarded the stable with a super effort, running 2nd & losing by a head.  This gorgeous son of Tiznow tried to take this salty field virtually wire to wire and fought gallantly down the stretch never giving an inch until the final yards, where multiple stakes winner One Mean Man just got his head up in time ahead of Tiznoble.  It was a fantastic effort by this ultra-talented colt and the newly turned 4 year-old looks to have a very bright future for Dare To Dream!

Back in Chicago at Hawthorne Racecourse, She’s Fine Tuned ran a nice second in Maiden Special Weight company going 6 furlongs on the dirt.  The hard-knocking Maclean’s Music filly has been running pretty consistently in her 2 year-old season, finishing in the money in 6 of her 8 races with four 2nd place finishes including a 2nd place effort in Stakes company.  She will now get a well deserved break before she starts back up in March for her 3 year-old season.

Looking to get in on the action? Check out our currently available partnership opportunities by clicking here.