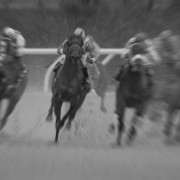 A total of 105 horses were entered across 10 races in advance of the Nov. 19 Twilight Opening Day at Fair Grounds Race Course & Slots.

The racing season kicks off with three stakes for Louisiana-breds on opening day, designed as preps for Louisiana Champions Day presented by Acadian Ambulance Dec. 10.

Owner-trainer-breeder Charles C. Smith’s millionaire veteran String Kingheads the field in the $50,000 Mr. Sulu Overnight at one mile on the Stall-Wilson turf course.

The 8-year-old son of Crowned King faces eight others in the Mr. Sulu under jockey James Graham from post six. His chief rival comes in the form of Royce G. Roberts’ Benwill, a 7-year-old son of Leestown. Winner of the John Henry Stakes at Evangeline Downs in April, the Jose Mendez trainee was beaten just over a length by String King in this summer’s Louisiana Legends Turf Stakes and will be guided from the rail by John Jacinto.

One race later in the Heitai Overnight at six furlongs on the main track, Dare to Dream Stable’s Jockamo’s Song returns to the Fair Grounds main track. He has never been beaten sprinting over the surface, including a win in last year’s Louisiana Champions Day Sprint in which he beat this race’s millionaire namesake.

Trained by Mike Stidham, the 4-year-old Half Ours gelding will retain regular rider Mitchell Murrill from post three in a full field of 14.

Drawn two stalls further inside is Gillian and Kirk L. Harris’ Sir Genghis. A two-time stakes winner at this year’s Evangeline Downs meet, the 5-year-old son of Tale of the Cat will cut back after four consecutive efforts around two turns. David Flores will ride for trainer Chad Pitzer from the fence.

In the day’s final stakes race, a field of 13 fillies and mares will travel six furlongs on the main track in the Happy Ticket Overnight led by Roger G. Smith’s multiple stakes winner Smittys Cougar.

The 3-year-old Half Ours   filly will be in search of her third straight win and eighth win overall in her 14th start for trainer Rob Faucheux after tallies at Remington Park and Delta Downs. David Flores will ride from post four.

The 11-time Fair Grounds leading trainer Tom Amoss will send out the main competition in the form of W C Racing’s Ramona’s Wildcat. The 5-year-old Wildcat Heir mare exits a runner-up effort in the Open Mind Stakes at Churchill Downs and moves back in against Louisiana-bred company. James Graham will have the mount from post seven.