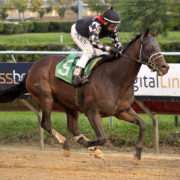 Dare To Dream Stable’s 6 year old gelding Heart Stopper proved much the best in a race originally scheduled for the lawn. Taken off the grass due to heavy rains the prior day and with a field scratched down to just 4 runners, Heart Stopper still had the tough task of turning the tables on 3/5 race favorite Lassell who defeated him at Arlington Park in their prior race. With jockey Carlos Montalvo back aboard, Heart Stopper broke alertly along with the rest of the compact field. Montalvo shifted Heart Stopper to the inside while reserved around the first turn. After a Half mile clocked in 48.67, Heart Stopper was last of four but just 3 lengths off the lead. As they continued down the backside, Montalvo was just sitting on Heart Stopper while suddenly losing ground on the entire field. As they approached the second turn, Heart Stopper was now 8 lengths off the lead and was looking like he was going to call it a day. Montalvo then shifted Heart Stopper off the inside and swung out four wide around the turn and into the stretch , leaving the gelding with a lot of work left to do just to get into the trifecta.  Montalvo gave Heart Stopper one left handed tap and Heart Stopper exploded down the stretch with a tremendous closing kick to gobble up the ground & easily kick clear to win by 3 lengths going away. Heart Stopper now has 3 wins, 2 seconds and 1 third from 9 starts, with earnings of $49,508 for 2016.

Congratulations to all the Dare To Dream Partners who have received a hat trick of victories this year from Heart Stopper. Kudos to trainer Mike Stidham, Hillary Pridham, Rigo Rosas, and the entire Stidham barn for another great training job. Finally to jockey Carlos Montalvo who rode the “Stopper” with the most supreme confidence. He gave us a bit of a scare in the middle portion of the race, but in the end there was never a doubt who was best on this day!

Jockamo’s Song to run in Heitai Stakes on Opening Day of Fair Grounds...
Scroll to top