The Wire
You are here: Home1 / The Wire2 / News3 / Taking the Reins of Investment Opportunities 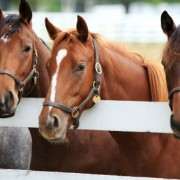 And they’re off! A female racehorse known as Nicole’s Dream thundered to victory on the racetrack 17 times in three years to win more than $750,000—more than double her expenses during that time, Michael Faber, manager of Dare to Dream Stable, a racehorse syndicate based in Illinois, said. Throughout the filly’s racing career, her owners were able to visit the stables, observe warm-ups and practice runs and experience the thrill of the winner’s circle. Their participation in her success was possible because of a partnership established through Dare to Dream Stable.

A syndicate allows investors to own shares in a racehorse, splitting the costs of purchase, training and maintenance between several partners. This not only makes Thoroughbred ownership accessible to those who cannot afford a high-caliber horse alone, but offers an excellent opportunity for those who prefer to diversify their investments across multiple horses. A partnership through a syndicate takes much of the pressure off investors by providing accommodation, training and management of the horse’s racing career.

Syndicates originated with a man named Cot Campbell, president of Dogwood Stable Inc., founded in 1973. “I bought a horse with a couple of friends,” Campbell said. “[I] conceived the idea of doing a limited partnership, which had never been done in racing….I was told that you couldn’t do that, but I didn’t know any better and I did do it…and the next thing I knew a lot of publicity had been generated about this new concept.”

Syndicates allow investors to diversify their investments across multiple horses

Today, Dogwood and Dare to Dream are two of many such syndicates that offer investors shares in potential champion Thoroughbreds. Such organizations typically mark up the horse before selling shares, retain a small share themselves and partake in the winnings. However, each syndicate approaches partnerships a little differently.

After keeping a 5 percent interest in each horse, Dogwood Stable divides the remaining 95 percent into four 23.75 percent shares in a general partnership. Dogwood partnerships are racing only, as the stable does not participate in breeding. A horse is sold—for a profit, if all goes well—once his racing days are over, Campbell said.

Dare to Dream Stable has a flexible investment approach, Faber said. “We typically offer…anywhere from $1,500 to $25,000 and more….We try to have something for everybody,” he said.

Another syndicate, Team Valor International, has a third approach. “We limit the extent of anybody’s participation [in one horse] to 10 percent, as we encourage our partners to spread their risk over several horses if possible,” Barry Irwin, president of Team Valor, said. Team Valor’s partnerships are all in the limited liability company format to provide an extra level of security to investors, Irwin said.

Some groups may charge extra management fees or offer a professional’s services to help plan investors’ free time when attending races, among other options, Faber said. “It’s like mutual funds, in a sense, that you have to be somewhat cognizant of how much the fee is to join the partnership, how much fluff do you need, and how much are you willing to pay for it,” he said.

Although the thrill of owning a racing Thoroughbred may entice some investors, racehorses are an extremely risky investment. “We don’t market our vehicles as pure investments, but as a way to get involved with a potentially high-class racehorse. We will do our best to maximize the investment dollars, but nobody should go into the venture expecting to make money,” Irwin said.

Despite the potential for high returns, there is also the threat of losing the investment entirely.

“We’re dealing with animals, obviously, not machines or robots. They can get sick. They can get hurt….[And] sometimes it’s not even a matter of sickness or health. They’re just, sometimes, not good,” Faber said.

Nicole’s Dream is a best-case scenario. Another horse, also owned by Dare to Dream Stable, did not fare as well. A colt was bought for $100,000, then became afflicted with a series of ailments that required extra money to address. During his approximately 18 months with Dare to Dream, the colt cost about $40,000 to maintain. Faber said he believes the colt failed to make even $10,000 through racing. In the end, the colt was sold for $5,000.

“That wasn’t too great of an experience but, you know, that does happen,” Faber said.

For some, the excitement of investing in a horse justifies the risks involved

But the excitement of owning a winning Thoroughbred may be enough to justify such an investment, especially considering the potential for success stories such as Dogwood Stable’s filly Cotton Blossom, who recently sold for $1.9 million. She was purchased for $210,000 in 2005, according to Dogwood’s website. The filly won $724,987 during her racing career, according to the site.

As the successes of Nicole’s Dream and Cotton Blossom suggest, fillies are considered a safer investment than colts by the racing community. As long as a filly has a respectable pedigree, she will have some residual value as a broodmare—a female horse used for breeding—even if she doesn’t fare well as a racer.

Colts, on the other hand, have virtually no value if they fail to succeed in the races. “[But] a colt offers the shot to be a horse of unlimited value, if he can make a great name for himself on the racetrack,” Campbell said. “There’s that dream that exists. People love to identify with the quest to run in the Derby, or the Preakness, or the Belmont. And those races are participated in by colts almost entirely….Colts are a shot at the moon.”

Campbell, Faber, and Irwin all said that racehorse ownership is more of a lifestyle investment than a purely financial investment. Although there is always the possibility that a horse will bring in significant monetary rewards, it is best if investors go in without that expectation. The thrill of watching a horse run and the excitement of being an integral part of that experience can be the true reward.

“If you’re only looking for financial return and don’t have a love for the horse, or for the sport, or just for the excitement that it brings, I would say it’s probably not a good way to invest,” Faber said. “However, if you like the challenge, you love the thrill and the adrenaline rush, and you have the money to be a little adventurous with…Thoroughbred racing is definitely in a class by itself.