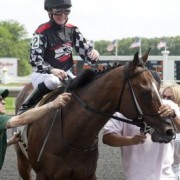 A SERIES OF FIRSTS ON THE FOURTH FOR APPRENTICE COLVIN
Thursday’s Independence Day card opener provided a first in the first for a first to kick off a great day of racing.  Jockey Samantha Colvin made her first ever start at Arlington International Racecourse a winning one in the maiden claiming event on Dare to Dream Stable’s Prince of Madness in the first race of the day.

An apprentice with only 76 previous career rides, Colvin was understandably ecstatic after what was her 10th career win. “It feels outstanding.  It was a perfect trip,” she expressed with a smile.  “(Prince of Madness) did everything I asked of him and when it was time to go, he went.  He was very patient for me.  I could not have asked for anything better.”

Ingrid Mason, the leading female trainer in wins and purses at the current meet, trains Prince of Madness. “Before I came I was riding at another track and when I decided to come here, (Mason) was one of the first people nice enough to let me ride a horse of hers,” explained Colvin.

Prior to coming to Arlington, Colvin was riding in Maryland and did not win her first race until May 2 of this year at Pimlico Race Course.  Since that victory at Old Hilltop, she is scoring at a 13% strike rate and has been in the top three 36% of the time.  On Friday she rides again in the nightcap on Rosie’s Wild Tale for owner Ruman Stable and trainer Mike Dini.

DONEGAL DUO PROBABLE TO TAKE ON DEFENDING CHAMP RAHYSTRADA IN ARLINGTON ‘CAP
The upcoming 78th running of the Grade III $200,000 Arlington Handicap has lured some talented nominees for its July 13 renewal.  The highly regarded Dullahan, a multiple Grade I winner,  invades from Kentucky to head a field that may include the likes of the quickly improving Coalport and two-time Arlington Handicap winner defending champion Rahystrada.

A winner of over $1.7 million in a 16-race career, Dullahan will be making his first start since a lackluster two-race Dubai attempt in which he finished 11th in two stakes, including the $10 million Dubai World Cup.  The son of Even the Score will also be making his first start on turf since last fall’s Breeders’ Cup Turf, where he finished ninth.  Despite having never won a turf race in five attempts, Dullahan’s 115 Equibase Speed Figure in that Breeders’ Cup Turf is higher than any of the fellow nominees have achieved on the grass.

Owner Jerry Crawford’s Donegal Racing also plans to start Finnegans Wake in the Arlington Handicap.  Runner-up in last year’s Grade I $500,000 Secretariat Stakes, over the course and distance of the Arlington Handicap, Finnegans Wake is exiting a well beaten fourth in the Grade I Manhattan Handicap on Belmont Stakes Day.  Though he has never won a stakes, the son of 2005 Arlington Million winner Powerscourt has finished in the top four in three Grade I events.

Both Finnegans Wake and Dullahan are trained by Dale Romans,  who hopes to use the race as a prep for the Million for Finnegans Wake.  Dullahan, on the other hand, has his sights set on defending his title in August’s Pacific Classic, which – like the Million – is a Grade I with a $1 million purse.  The Arlington Handicap is the last local prep for the Million – a race Romans has finished first and second in with his only two starters, including last year’s winner Little Mike.

Probable to take on the Donegal duo will be defending Arlington Handicap champion Rahystrada.  With more than $1.2 million in earnings and a placing in last year’s Million, Robert E. Courtney, Jr.’s 9-year-old looks to return to winning form in the event that provided his only victory of 2012.

Like last year, the race will be Rahystrada’s third of the year and comes after a decent performance in a graded stakes.  Last out, the Byron Hughes trainee finished fourth in the Grade II Monmouth Stakes on the Jersey Shore.   The gelded son of Rahy has finished out of the top four only once in his last 10 starts.

From an old reliable to new kids on the block – the probables for this year’s Arlington Handicap also includes the quickly improving and lightly raced horses Coalport and Keep Up.  The Illinois-bred Coalport was an expert winner of the restricted Black Tie Affair Handicap last out over the local turf, which followed an equally as facile victory in an Arlington allowance.  The son of Kitten’s Joy is owned by leading national owners Kenneth and Sarah Ramsey and conditioned by leading Arlington trainer Wayne Catalano.  An undefeated 3-for-3 over the surface, 4-year-old Coalport will be attempting 10 furlongs for the first time in his 12-race career – a distance he is bred to relish.

Mill Ridge Farm’s Keep Up, like Coalport, is coming off an impressive local stakes win for his connections.  On June 8, the Alex Clarkson trainee displayed a flashy late kick to mow down graded stakes winners Corporate Jungle and Workin for Hops in the Listed Swoon’s Son Stakes.  A son of Kentucky Oaks winner Keeper Hill, 6-year-old Keep Up will be making only the 14th start of his career.

Other probables worth noting include Lothenbach Stable’s Mister Marti Gras, who was third last year in this race and exits a hard-charging second in the Grade III Hanshin Cup for trainer Chris Block.  Also, Shadwell Stable’s Najjaar, who was third in last year’s Arlington Classic, comes into the race in sharp form following a third, beaten only a half-length, in the Grade III Louisville Handicap for trainer Danny Peitz.

Colonial Flag, owned by a partnership of Skara Glen Stables, William S. Farish and George Prussin, is being pointed toward the Modesty following her seasonal debut – a respectable third in the Grade III Mint Julep Handicap at Churchill Downs.  In 2012, as a sophomore, the daughter of Pleasant Tap won the Grade III Ontario Colleen at Woodbine and placed in two other graded stakes for trainer Michael Matz.

Hernandez Racing Club’s local favorite La Tia, a winner of five of six Arlington starts, looks to continue her career form in the Modesty for trainer Armando De La Cerda.  A confirmed frontrunner, La Tia comes off a two consecutive wire-to-wire wins over the local lawn, including a 3½-length victory in the restricted Lincoln Heritage Handicap on June 15.  The four-time stakes winning daughter of City Place will look win at a furlong farther than she ever has on the grass.

Andrew Stone’s Strathnaver, a winner of two of her three American starts for trainer Graham Motion, won the Grade III Bewitch Stakes at Keeneland in April in her second stateside start.  Last out, the daughter of European champion Oasis Dream threw in a clunker in the Grade II Sheepshead Bay at Belmont Park.  She is also cross-nominated in the Grade III $150,000 Stars and Stripes Stakes at the same 12 furlongs at which she won the Bewitch, but is assumed to be more likely to enter the Modesty on the same day.

Other interesting probable are Kenneth and Sarah Ramsey’s improving Tipsy, a long-striding daughter of Kitten’s Joy trained by Wayne Catalano.  Last out, Tipsy chased La Tia home in the Lincoln Heritage in what was yet another step up in form for the filly.  Also, Shadwell Stable’s Ausus has been pointing toward the Modesty since an unlucky fourth in the Grade III Arlington Matron on May 25 over the main track.  A filly who will appreciate the increase in distance, Ausus is trained by Danny Peitz.

The Arlington Handicap and Modesty fields, along with those of the still developing Stars and Stripes Stakes and Grade III American Derby, make up the graded stakes on Million Preview Day, July 13.

Taking the Reins of Investment Opportunities
Scroll to top