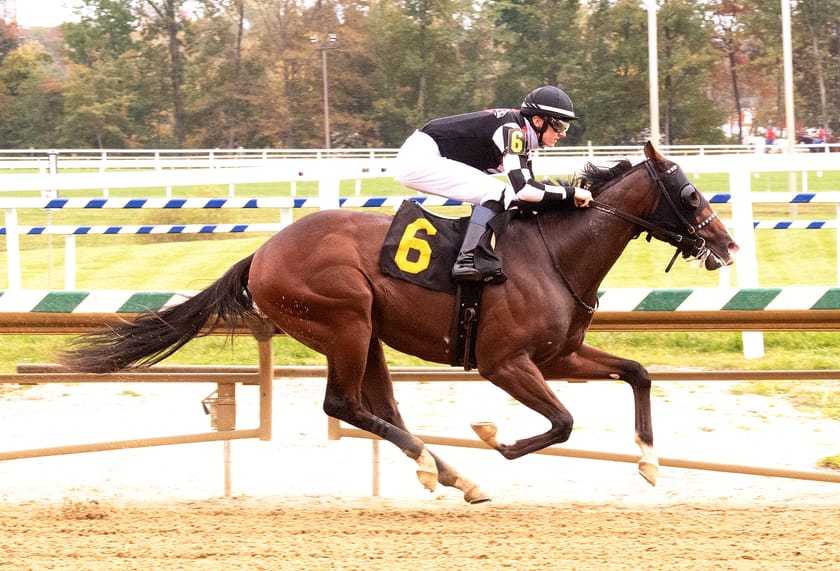 10/10/20 | Laurel, MD – Dare To Dream Stable’s 2 yr old colt Starburst made his debut a very sweet one romping home to an emphatic 5 1/2 length victory against his 10 other rivals in this 5 1/2 furlong sprint. Starburst had been training exceptionally well, and all the connections were very confident that would translate to his maiden voyage. Jockey Trevor McCarthy would be aboard the powerful bay son of Upstart. Breaking from the middle of the starting gate, Starburst would set a pressured pace while traveling the first quarter in 22.29. Starburst maintained the lead to the turn with McCarthy sitting chilly on Starburst. When they hit the top of the stretch, McCarthy gave Starburst some mild encouragement, and he quickly extended his lead and drew off in deep stretch to easily defeat his ten rivals stopping the clock in 1:04.00. It was the easiest of victories and this boy looks to have a bright future.

Congratulations to the Dare To Dream Stable partners on this emphatic victory! It was also a fantastic training job by Mike Stidham, Hilary Pridham, Ben Trask, and the entire team having Starburst sharp and ready at first asking. A special mention to Danny Werre and Charlena Werre who had Starburst since he was a yearling and did an outstanding job breaking him and preparing him for what it takes to win on the race track. Finally to leading Maryland jockey Trevor McCarthy who rode Starburst with utmost confidence and made it look easy!

EquiPhotoQuick Tempo wins impressively at PARX Racing in race #9 on 10/20/20!
Scroll to top