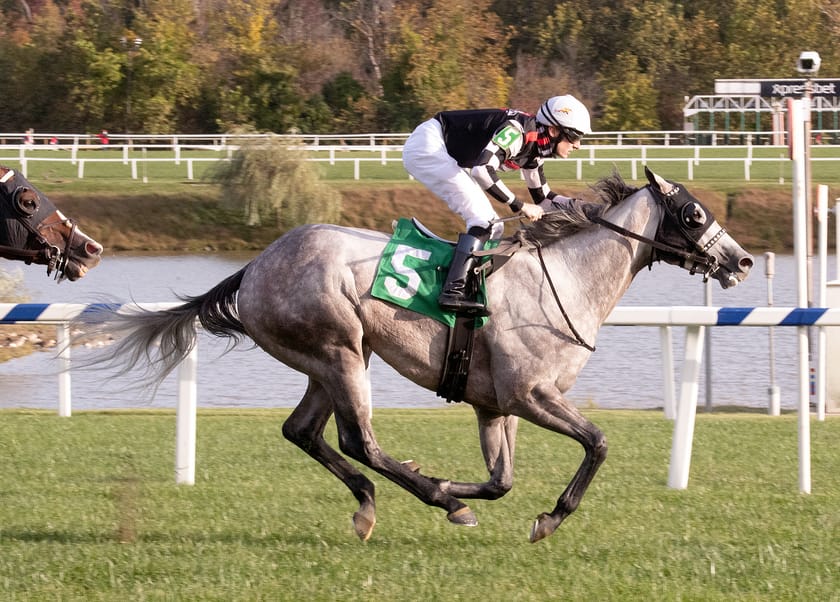 10/09/20 | Laurel, MD – Dare To Dream Stable’s 3 yr old colt Embolden returned to his stakes winning ways by taking down the Punch Line Stakes going 5 1/2 furlongs on the turf at Laurel Park. Embolden was coming off an uncharacteristically poor effort at Kentucky Downs where he just did not care for the unusual undulating turf course. Embolden would break from the 6 hole in this large field of 14 Virginia Breds. Jockey Trevor McCarthy was reunited with Embolden whom he had ridden to a stakes victory as a 2 yr old.

When the gate popped open, Trevor immediately put the powerful gray son of The Factor into the race tracking the expected other speed horse from the rail. After the opening quarter which was clocked in a pretty swift 21.88, Embolden was in a perfect spot on the outside just one length off the leader’s flank. McCarthy knew what he had underneath him, and never panicked as Embolden sat in the same spot right off the leader around the bend. When they reached upper stretch, McCarthy let Embolden out a notch and he easily took command of the race opening up a 3 length lead. From that point on McCarthy just asked Embolden for mild encouragement and they coasted home to a one length victory while never being threatened in a pretty snappy final time in 1:02.07 for the 5 1/2 furlongs.

This was Embolden’s 3rd win from 10 starts including 2 stake victories. The ultra-consistent classy Embolden also has 3 seconds and 2 thirds which include being grade 3 placed in his ten lifetime starts. He has amassed $246,500.00 in earnings so far to date.

Congratulations to all the Dare To Dream Stable partners who have enjoyed quite a ride with Embolden. It was a terrific training job by Mike Stidham, Hilary Pridham, and the rest of the team having Embolden ready for a peak performance. Finally, kudos to jockey Trevor McCarthy who rode a fantastic race. He made sure to get Embolden out and in the clear, avoiding any traffic that can occur in a 14 horse field.