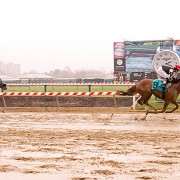 BALTIMORE, MD – April 10, 2015 – Dare To Dream Stable’s Nate’s Dynamite splashed his way down the sloppy Pimlico stretch to finally nab his elusive maiden victory. Nate was coming off a couple tough runner-up finishes at Laurel where he looked like a winner, only to get beat by a very small margin in the final yards. Today, Nate made sure there was going to be no doubt who the winner would be. Sent off as the prohibitive favorite, Nate broke a step slow leaving the starting gate. Under jockey Jevian Toledo, the son of Mineshaft quickly recovered and immediately advanced up the outside, passing most of the field before the turn. Nate circled three-deep on the turn while setting his sights on the pacesetter Skylar, with Toledo providing some good encouragement along the way. When they approached the 1/8th pole, Nate put a head in front of Skylar and at that point it was just a question of how many lengths the winning margin would be. With all the momentum, Nate cruised to an easy four length victory leaving no doubt who was best on this day.

Congratulations to all the Dare To Dream Stable Partners on the win. Thanks to trainer Mark Shuman for a job well done. Of course, thanks to jockey Jevian Toledo who earned his money today on Nate, as he can take some prodding before he decides it’s race day!

Join in on the fun & excitement! Check out the “current partnerships” section of the website for available opportunities!