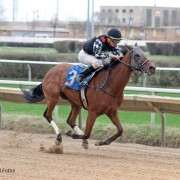 Dare To Dream Stable’s Kingston Terrace easily dispatched with her four other rivals in a 5 furlong dash that was moved off the turf at Hawthorne Racecourse on Sunday Afternoon. When the gates popped open, Kingston Terrace broke readily to immediately dispute the pace. She was joined from the inside, as expected, by the Larry Rivelli conditioned speedster, Nevermesswithrichie, and another speedy type in Distant Mesa from her outside. Kingston was in between her two foes through the short trip down the backside and when they approached the turn, jockey Emmanuel Esquivel did a great job of asking Kingston for a bit extra so he didn’t get squeezed going through the bend. Once they completed the turn for home, Kingston Terrace began to open up a small lead. When she hit the upper stretch, the bay daughter of Johannesburg began to extend her lead easily on the rest of the field. In deep stretch it was all but over. Under brisk handling by Esquivel, Kingston kept extending her lead to cross the wire in front by a widening 5 lengths over her closet rival, Distant Mesa. This was Kingston’s fourth win from eleven starts which also includes two seconds and two thirds for earnings of $61,965.00 in her career.

Congratulations to all the Dare To Dream Partners on a very impressive victory. Trainer Mike Stidham did a fantastic job getting Kingston Terrace sharp and ready to run a great race. Kudos to jockey Emmanuel Esquivel who rode the mare like he was on the best horse from the moment the gates popped open.