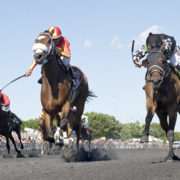 It was an excellent weekend for the Dare To Dream Stable color-bearers at Arlington Park from June 3rd to June 5th. On Friday, June 3, 2016 Kingston Terrace blew her opponents away in a 5 furlong starter allowance race on the grass. The 6 year-old Johannesburg mare broke alertly and tracked the pace setter through the opening 3 furlongs of the race. When asked by the jock for run as they hit the stretch, Kingston Terrace responded nicely and abruptly under Jose Valdivia, Jr. to open up and pull away with ease to win by 4 1/2 lengths going away. Michael Stidham trains Kingston Terrace for Dare To Dream Stable. She loves the Arlington Park sod, notching her 5th victory over that surface and 2nd in a row this meet. She now sports an overall record of 22-9-3-4 with earnings of $125,985.00.

Following on the heels of Kingston Terrace’s win on Friday was a gritty performance and thrilling victory by Dare To Dream Stable’s 6 yr old Gelding Heart Stopper in Sunday’s finale at Arlington Park. In a race that was originally carded for the turf but moved to the polytrack due to heavy rain the day before, Heart Stopper turned a disadvantageous outside post draw into a more advantageous gate with a number of scratches that reduced the field from twelve to seven. The son of Lion Heart broke a bit outward and bumped his rival to the outside but jockey Mitchell Murrill quickly gathered Heart Stopper to secure a nice stalking position while four wide around the first turn. Heart Stopper remained in a good position on the backside always within 2-3 lengths of the early pace set by Artful Bee. After a half mile which was run in 48.80, both Heart Stopper and Ol Army began to make their run on Artful Bee. Murrill shifted Heart Stopper to the inside while jockey Julio Felix took to the outside with Ol Army and they swallowed up Artful Bee at the 6 furlong marker. As they straightened for home, it was “game on” and these two foes were about to engage in an epic stretch duel. Mitchell Murrill was busy vigorously assisting Heart Stopper with right handed encouragement all through the stretch while Julio Felix was all out with left hand encouragement on Ol Army. Neither of the two were willing to go down without a fight. With heads bobbing back and forth through the stretch it was anybody’s race with only their long noses separating one another with each and every stride. As they approached the line it was going to come down to whoever fought hardest to get their head across the line first. In the end, Heart Stopper and Mitchell Murrill prevailed in what was an exhilarating finish brilliantly called by track announcer John G. Dooley. Heart Stopper now has an overall record of 29-4-8-2 with earnings of $128,496.

Kara’s Angel Runs Nice 2nd Off a 4 Month Layoff to Roundout the Weekend. Congrats to the entire DTD Family!

Congratulations to trainer Mike Stidham, Hilary Pridham, and their fantastic team for great work in getting Heart Stopper to break through after many trials and tribulations. He’s been a tough guy to figure out which makes this victory even more gratifying. The team also has Kingston Terrace at the top of her game right now. Prior to those 2 victories this weekend, Kara’s Angel also ran a real nice race off a 4 month layoff to run 2nd by 2 lengths in race 4 at Arlington Park on Friday.

Kudos to jockey Mitchell Murrill for his rides on Heart Stopper and Kara’s Angel. He proved once again that he’s one of the best at Arlington park and the “go to guy” for Dare To Dream Stable! Thanks as well to top jockey Jose Valdivia, Jr. for his deft handling of Kingston Terrace in her latest triumph as well. He’s now 2 for 2 on the mare!

Finally, congrats to all our partners on this excellent weekend, including a special shout out to first time winning owners Mike and Wendy Hiser!

For further information on how you can get in on the action, click here.