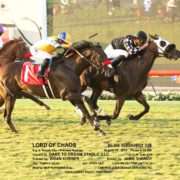 Dare To Dream Stable’s Lord Of Chaos doubled up on his maiden special weight win at Del Mar less than a month ago, taking down a full starting gate of allowance foes in race #10 on 08/27/16. With  veteran jockey Jamie Theriot in the irons for the first time on Lord of Chaos, the dark bay broke alertly from the gate and obtained a nice stalking trip early on in 4th place and about 3 lengths from the lead in the field of 10.  A half-mile into the race Lord of Chaos was still in 4th place, but was creeping a bit closer on the leaders and within 2 lengths of them and still on the inside. After 3/4 of a mile in 1:12.36 and heading into the turn, Theriot tilted Lord of Chaos to the outside a bit and he began to make a move on the leaders 3 wide. He gained the lead just inside the sixteenth pole and held off the furious charge of Temple Keys to win by a 1/2 length in the 1 1/16 mile turf contest and take home the winners share of the $62,000 purse, bringing his total earnings for the year to well over $100,000. The final time for the race was 1:42.30.

Congratulations go out to the Dare To Dream Stable partners who have enjoyed an exciting year with Lord of Chaos and an ultra-satisfying meet “where the turf meets the surf”! A big thanks to trainer Brian Koriner and his entire team who have really done a super job with Lord of Chaos. Jamie Theriot gave Lord of Chaos a perfect ride as well, so thanks and congrats to him as well. See below for the video of the race and a link to the race chart as well.