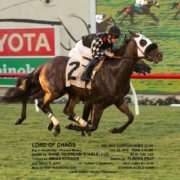 Dare To Dream Stable’s Lord Of Chaos broke through the maiden ranks by beating a full field of California Breds in a one mile turf event at beautiful Del Mar. With top turf jockey Flavien Prat aboard, the good looking bay gelding by Temple City was set to break from the 2 hole in the packed starting gate. When the gates sprung open, Lord broke sharply but Flavien immediately took a hold of him and settled towards the back of the full field. A confident Prat was in no hurry & he just let Lord Of Chaos settle into a comfortable spot through the first quarter mile while saving some ground. At that point of call Lord was further back than he had been in any of his previous races, about 9 lengths off the leader. Lord was still traveling very comfortably on the back side, and when they reached the half mile marker he began to creep up a bit on the pack. Then when they reached the 6 furlong marker he made a very powerful middle move with Prat weaving him through horses to get within 3 lengths from the lead in a matter of a split second. The field was now navigating their way through the second turn with Lord Of Chaos in 3rd and ready to pounce on the leaders as soon as there would be an opening in the front wall of horses. Lord finally found a gap outside and he shot through to gain the lead in the stretch a sixteenth out. It was now down to a battle between him and the #11 Ward ‘n Jerry. In the end Lord was just too tough and prevailed under confident urging by a growing 1/2 length to take the lion’s share of the nice $63,000 purse. Lord Of Chaos has amassed $64,581.00 since debuting in January of 2016 with three 3rd place finishes at Santa Anita to go along with this maiden score by the sea! He’ll try to add to that total before the Del Mar meet ends with another start there later in the meet.

Congratulations go out to all the Dare To Dream Stable partners who had been teased with some strong efforts by Lord only to get beat by some small margins in previous races and with some terrible racing luck in his previous start. Kudos to trainer Brian Koriner and his entire team who have done a fantastic job keeping the talented gelding sharp while also making some subtle changes that produced Lord’s best effort to date. Finally to Jockey Flavien Prat who once again proved why he is considered one of the best young jockeys out there and one who excels on the turf. He rode Lord Of Chaos like he knew he was on the best horse and it was a picture perfect ride!

He’s a Dandy Candy wins at Arlington Park, but is wrongfully taken down by the stewards on July 22, 2016!

Dare To Dream Stable’s He’s a Dandy Candy was robbed of a hard earned victory in the 6th race at Arlington on 7/22/16. This was a 5 furlong turf sprint and the good looking gray Sidney’s Candy gelding was seeking his maiden score after several on the board and 4th place finishes in his career to date. He’s a Dandy Candy broke well, but was brushed by another rival and shuffled back between rivals midway through the backstretch. He was guided inside to save some ground on the turn by jockey Mitchell Murrill. Inside the 1/16th pole, He’s a Dandy Candy launched his move from 3rd to take the lead and prevail by a long neck and get the victory, while drifting out slightly under right handed urging by Murrill. Shortly after the horses were returning to get unsaddled, the Objection sign was lit up and the celebration was put on hold. It took the Arlington Park stewards about 12 minutes to come up with an egregious decision to disqualify He’s a Dandy Candy from 1st and place him 4th despite the replays clearly showing drifting in by the outside horse as well as some other interference going on. In short, there were multiple minor infractions by multiple horses which has NO impact on the placing of any of the horses in the race. This was especially true of the 1 horse ridden by C. H. Marquez, Jr. who was the one who had made the objection and was completely out of horse at the time he provided his academy award acting job. Somehow. those manning the chairs in the steward’s box bought the act and still couldn’t figure out that it didn’t matter anyway. The decision was decried by every single person we ran across at Arlington Park including a bunch of disgruntled gamblers, other trainers and the track handicapper. Such is racing though. It’s one of the problems in the sport when you have unchecked and unfettered incompetence with no oversight. An area of racing that needs attention for sure. Our partners and the betting public deserved better.

Heart Stopper Runs a Nice 2nd at Arlington Park on July 23, 2016 Off the Heels of 2 straight Victories to Cap Off the weekend.

We’d be remiss if we didn’t give our boy Heart Stopper some credit for a nice effort in the 3rd race at Arlington on 7/23/16. He was stepping up in class again off 2 straight hard earned victories at Arlington. It looked like he was going to get the hat trick as he gained the lead in the 1 mile turf contest inside the 1/16th pole, but was run down in the final couple jumps to lose by just over a length. The hard-knocking IL Bred by Lion Heart has 2 wins and 2 places in his last 4 starts and is in very sharp form. Hopefully he can start another winning streak next time out.

For further information on how you can get in on the action, click here.

Lord of Chaos Makes It 2 In A Row At Del Mar With Allowance Win For Dare To...
Scroll to top