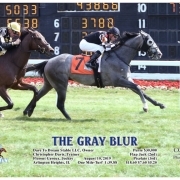 08/10/19 | Arlington Heights, IL – Dare To Dream Stable’s promising 2 year-old gray colt, The Gray Blur, made his turf debut on The Arlington Million under-card. The Gray Blur was coming off a troubled trip in his debut on the Arlington Park polytrack last month. He showed flashes of talent in that race and was training forwardly leading up to this one mile Maiden Special Weight turf event. The Gray Blur would have the services of world class jockey Florent Geroux aboard this time and donning blinkers for the first time as well. The “Blur” broke from the 7 hole in the field of 9 talented maidens and although he veered out slightly leaving the gate, the master Geroux quickly redirected him to lead the field into the first turn. They continued to lead on the backside as Geroux tried to slow the pace down as much as possible. After an opening quarter mile time of 24.93, Geroux really slowed down that 2nd quarter and the half mile was timed at 51.36 with the talented son of Fast Anna relaxed on a 1 1/2 length lead on favored Flap Jack. The pressure was turned up on the 2nd turn as Flap Jack and jockey Adam Beschizza tried to get a bit closer to The Gray Blur. “Flo” asked The Gray Blur for a bit more and he responded keeping Flap Jack at bay. Flap Jack looked like he almost got on even terms with ”The Blur” as they turned for home, but Blur dug his heels in and repelled that challenge to open up and maintain a 1 length advantage through the stretch. In deep stretch Flo asked The Gray Blur for all he had and showed great determination to hold off Flap Jack and the rest of this talented field of maidens with the final margin of 1/2 length on the wire in a final time of 1.39.88. It was another 1 1/2 lengths to 3rd place finisher and 4 1/2 to fourth. The Gray Blur earned $18,000.00 in taking home the first place money in this $30,000 maiden special weight event.

Congratulations to the throng of Dare To Dream Stable partners who celebrated in the raucous winner’s circle in front of the huge Million Day crowd. It was quite a spectacle! Huge kudos to rising star trainer Chris Davis who did a fantastic job getting The Gray Blur ready.  Chris was confident that this colt would be better on the turf and going two turns, and also added the blinkers for this start. Chris and his assistant Mynor Ortiz are a fantastic team and having a real good Arlington meet. Of course, tons of credit to to jockey Florent Geroux, once again he showed why he’s one of the best around. “Frenchie” rode the “Blur” perfectly and also bagged two other turf wins earlier in the card.

Coady Photography Star of Kodiak wins MSW on the Turf at Arlington Park in race #5 on 09/07/19! 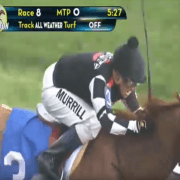 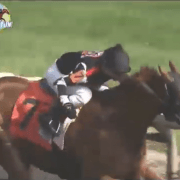 Tweets by @dtdstable
Embolden Wins by 10 Lengths on Opening Night at Colonial Downs!

Coady Photography Star of Kodiak wins MSW on the Turf at Arlington Park in race #5 on 09/07/1...
Scroll to top