05/27/18 | Arlington Heights, IL – Dare To Dream Stable’s 4 yr old gelding Memory Bank overcame a troubled trip to secure a very nice $38K allowance win at beautiful Arlington Park. Memory Bank was coming off a well deserved mini-vacation after a long and successful 2017 thru the early part of 2018 campaign. The handsome son of Misremembered would go to post as the even money favorite in this one mile route on Arlington’s pristine turf course. Memory Bank, breaking from the inside post, was very keen from the get go and jockey Mitchell Murrill had his hands full in the early stages of the race. Going into the first turn, Memory Bank was a bit rank and up on the heels of the early leaders. Murrill had to make sure he didn’t clip heels with any of those horses right in front of him while trying to put the brakes on Memory Bank and having to maneuver him out of trouble at the same time.  Memory Bank finally settled going down the backside, but was still in tough position bottled up on the inside of horses. Murrill had a ton of horse left going into the 2nd turn and it was just a matter of finding an opening for Memory Bank to make his patented, sustained move. With about a furlong to go, Murrill was able to shift Memory Bank out a lane off the rail and he burst through an opening in between horses to surge into the lead. Memory Bank was then able to fend off a charging Andreas to secure the victory by 3/4’s of a length, while it was another 2 1/4 back to the third place finisher. This was Memory Bank’s 3rd career victory in 11 starts. He has 4 seconds and 2 third place finishes to go along with those victories. In fact he has only finished off the board in one start, one in which he was the victim of a horrendous decision by the Gulfstream Park stewards and DQ’d from another second place finish earlier this Winter. The remarkably consistent Memory Bank has now amassed $87,347.00 in career earnings. He will look to move that total over the $100K mark when he makes his next start in the $75K Black Tie Affair Handicap going 1 1/16 miles on the turf at Arlington on June 9th.

Congratulations to all the Dare To Dream Stable partners, many of whom were able to enjoy the winner’s circle celebration in front of a large Memorial Day weekend crowd. Kudos to trainer Mike Stidham, Hilary Pridham, and Rigo Rosas getting Memory Bank ready to win off the layoff. A shout out to trainer Danny Werre for doing a fantastic job of caring for Memory bank while on vacation and then getting him fit and sharp for his return. Lastly, thanks to jockey Mitchell Murrill for not panicking when he was in a bit of a compromising position for much of the race, knowing he was on the best horse. 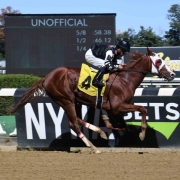