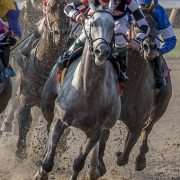 Dare To Dream Stable’s Jockamo’s Song did his thing once again, winning another stake race in Louisiana. This time he took his talents to Louisiana Downs for the first time, capturing the $50k Louisiana Cup Sprint Stakes. The champion grey gelding by Half Ours was coming off an impressive win in the $100k Louisiana Legends Sprint Championship at Evangeline Downs last month and was looking to continue his dominance as the best Louisiana Bred sprinter. Jockamo was lining up against 11 rivals in this 6 furlong dash with jockey Gerard “G Money” Melancon back aboard. As usual, Jockamo broke on cue when the gate sprung open, but this time was much closer on the pace than his previous few races. After the first 1/4 mile that was run in 22.97, “Jocko” was second and perched just a half length off the leader Sea Vow. Those top 2 positions didn’t change through the first half mile, although Melancon was sitting chilly on Jockamo while the jockey on Sea Vow was beginning to ask for some more run from his charge.  The duo battled through the turn with Jockamo beginning to assert his class and wear down that rival. When they straightened for home Melancon just shook the reigns and Jockamo began to pull away from the rest of the field. In deep stretch the race was all but over as Jockamo had forged ahead of the rest of the field by 4 lengths and everyone else was battling for second. In the end it was an easy 3 3/4 length victory with Jockamo stopping the clock in 1:10.83. This was Jockamo’s Songs 3rd win for the year from 6 starts and second straight stakes victory. His earnings for the year are $132,450.00 and his career earnings are now at $349,914.00. For his career he’s won 4 stake races and placed in 3 others and has an outstanding career record of 8 wins from 19 starts with 5 more in the money finishes.

Congratulations to all the incredibly happy Dare To Dream Stable partners who are enjoying an amazing ride with this champion. Cheers to trainer Mike Stidham, Hilary Pridham, and the entire team on just an outstanding training job keeping Jockamo in outstanding form for the past couple of years. Thanks to top notch veteran reinsman Gerard  “G Money” Melancon for another terrific and confident ride. He fits Jockamo like a glove and we expect a few more wins with this duo before it’s all said and done.