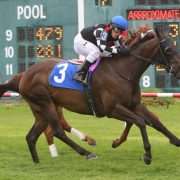 Dare To Dream Stable’s Golden Story made his first trip to the city of Boston and Suffolk Downs a winning one by using the long stretch in a 5 furlong turf sprint to get up in time at the wire. Ridden by Jockey Brian Pedroza for the first time, Golden Story broke alertly and was immediately well-placed, stalking just a few lengths off the leading pack. Pedroza kept that position as they entered the turn where he then swung the Medaglia d’Oro gelding to the outside and began to launch his move around the turn. Once they straightened for home, Golden Story had his sights on the longtime leader Khan Of Khans. That hard-knocking veteran was not going to relinquish the lead without a fight, and Pedroza would need every ounce of that long Suffolk stretch along with Golden Story’s determined effort to get up before they hit the wire. In the end, Golden Story was able to sustain his long stretch drive to nab Khan Of Khans by a neck as they crossed the finish line. It was another 2 1/4 lengths back to the third place finisher.

Congratulations to our Dare To Dream Stable partners on a real nice victory. Also to trainer Mike Stidham and his entire team (Hilary Pridham, Ben Trask and many others) for a fantastic training job. Thanks to jockey Brian Pedroza who was donning the Dare To Dream colors for the first time. Brian had Golden Story in a good spot throughout the race and timed that long stretch drive perfectly! After some time off to end 2016, this was Golden Story’s first victory of 2017 to go along with a second and third in four starts.