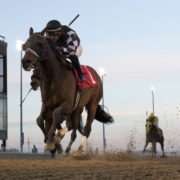 Making his 7 year old debut after a 5 month vacation, Dare To Dream Stable’s Heart Stopper proved he was just like a fine bottle of wine, getting better with age in winning this 1 1/16 mile dirt allowance in race 7 at Hawthorne Race Course on April 7, 2017.

The “Stopper”, who looked fabulous in the paddock and post parade, had been training exceptionally leading up to this race. Although dirt isn’t his best surface, a solid performance was expected from the venerable gelding. Breaking from the 1 hole with Santo Sanjur aboard, the dark bay son of Lion Heart broke sharply and immediately went up to the lead with the expected pace setter High Diver. Jockey Sanjur eventually let High Diver take control of the front end while staying close enough to keep that pace setter in his sights in a sweet stalking position on the backside. At that point that rival had enough and was about to back out of the race. Heart Stopper now had his mind set on victory, but would have to fend off a new challenger in Bahnke, who was making his own strong move on the outside. When they reached the top of the stretch the two foes battled before Heart Stopper determinedly fended off that challenge and drew clear in the late stages to cross the wire by a measured length ahead of Bahnke. It was another 6 1/2 lengths to the 3rd place finisher.

It was a fantastic, professional effort by this mighty dynamo who sometimes has a mind of his own. Heart Stopper now has 7 wins in his career and earnings of $184, 317.00. He has also amassed 10 seconds and 3 thirds in his racing career, and with a full Summer ahead it looks like Heart Stopper will add to these impressive statistics. Congratulations to all the Dare To Dream Stable partners who have enjoyed a fun & exciting run with Heart Stopper. Kudos to trainer Michael Stidham and his staff of Hilary Pridham, Rigo Rosas and the rest of the team. A special mention also goes out to Danny Werre & Charlena Schenck Werre who gave top-notch care to Heart Stopper while on vacation and got him ready and looking fantastic when it was time to return to the races. Many thanks to jockey Santo Sanjur who gave Heart Stopper a masterful ride!