08/24/18 | Del Mar, CA – Dare To Dream Stable’s 3 year-old multiple stakes winning filly Spiced Perfection got back to her winning ways in wearing down a solid group of allowance runners and pulling away at the finish to win by a widening 1 1/2 lengths at Del Mar in race 6 today.  “Spicey” was coming off an uncharacteristically dull performance in the $150K Fleet Treat Stakes for Cal Bred fillies back in July, finishing a disappointing 4th. With no other options currently available, Spiced Perfection was entered against open company and older horses for the first time while also donning blinkers for the first time. Spiced Perfection broke alertly and jockey Joe Talamo secured an outside stalking position about 3 lengths off the pace. Talamo kept that position while 3 deep on the backstretch and into the turn and he began to ask the bay daughter of Smiling Tiger for a bit more run as they hit the top of the stretch. As Spiced Perfection shifted out a bit more in the stretch, Talamo went to his left hand for urging and “Spicey” made a sustained move to get up on even terms with longtime leader Love A Honeybadger. About a sixteenth out, the determined filly took command of the race and shook clear in the final yards, pulling away with every stride to win clear by a widening 1 1/2 lengths in a snappy time of 1:10.56 under confident handling by Talamo. It was another 3 1/2 lengths back to the 3rd place finisher.

This was Spiced Perfection’s 4th win in her brief career, with 2 of those wins being stakes victories. She also has 4 runner-up finishes and a 3rd place finish in her 11 career starts. With this victory she now has amassed $372,985 in career earnings. 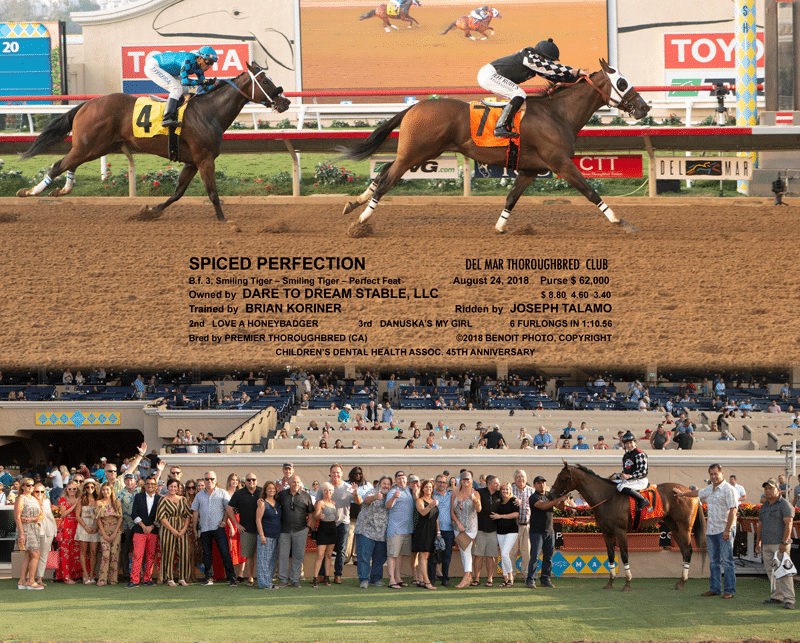 Congratulations to all the Dare To Dream Stable partners on this very gratifying win. We all knew that previous race was uncharacteristic and believed our champion filly would make amends. Kudos to trainer Brian Koriner and his staff on this win. Brian was very confident that the real “Spicey” would show up this time. He also decided to put blinkers on for the first time and she responded with a top performance. Jockey “Smokin” Joe Talamo once again proved that he and Spiced Perfection are a perfect fit. He has ridden her to perfection time and time again and been aboard her since her initial start as a 2 yr old.

April 7, 2018 | Arcadia, CA – Dare To Dream Stable’s 3 year old filly Spiced Perfection gave her connections a great thrill by winning the $200,000 Evening Jewel Stakes in front of 40,000 strong on Santa Anita Derby Day. Spiced Perfection was coming off a 2 1/2 month freshening after a tough, but successful 2 yr old campaign that included a win in the Generous Portion Stakes at Del Mar.

A field of eight Cal Bred fillies were lined up for this 6.5 furlong stake battle with the heavy odds-on favorite Show It N Moe It drawn nicely on the outside, while Spiced Perfection drew the disadvantageous rail. Joe Talamo, the regular rider aboard “Spicy”, would have to make sure she broke sharply and then try to work out a trip from the inside without getting in a compromised position. Fortunately, the small but powerfully built bay daughter of Smiling Tiger broke on cue and Talamo was able to secure a good position on the inside as favored Show It N Moe It and longshot Blessed Lady battled on the lead.  While on the backside Talamo looked to have Spiced Perfection in the perfect spot saving all the ground while Show It N Moe It was in a real tussle on the lead with Blessed Lady. That top pair battled through the opening half mile in a snappy 45.48. Talamo continued to track those two foes around the turn while looking to have a ton of horse beneath him. When it was time to go, Talamo slipped Spiced Perfection to the outside to engage Show It N Moe It who had finally put away Blessed Lady. At the top of the stretch, Talamo had “Spicy” right along the outside of the favorite and the stretch battle to the wire was on.  Hall Of Fame jockey Mike Smith aboard Show It n Moe It and Talamo glanced at one another and both began to vigorously ask their fillies for everything they had. It was back and forth as they battled down the length of stretch with each filly putting her head in front a few times. Eventually, Spiced Perfection proved she had a little more in the tank and was able to out finish the favorite to the wire by a good neck in a thrilling stretch duel. She stopped the clock in a snappy 1:17.08 for the 6 1/2 furlongs. It was another 4 3/4 lengths back to the 3rd place finisher, which showed how good both these fillies ran and how they were much the best on this day.

This was Spiced Perfection’s 3rd win in 8 career starts. She also has 3 seconds and 1 third to go along with those victories. The only off-the-board finish in her career came on the turf, a surface she did not seem to care for. The multiple stakes winning filly has now amassed $277,625 in her young career, with hopes of many more victories on the horizon.

Congratulations to all the Dare To Dream Stable Partners, many of whom were a part of the raucous celebration in Santa Anita’s winner’s circle. It was an absolutely outstanding training job by Brian Koriner who had “Spicy” ready to fire at first asking off the layoff which was no easy feat, especially in a tough stake race. Finally, what can you say about jockey “Smokin” Joe Talamo? That was plain and simple a perfect ride that was ridden to script! It’s not easy to out ride Mike Smith, but that’s exactly what Talamo did in this race. Spiced Perfection will now look forward to a long Summer campaign and continued success the rest of the year.

Dare To Dream Stable’s 2 year-old filly Spiced Perfection was seeking perfection at at Del Mar, attempting to go 2 for 2 at the famed oval “Where The Turf Meets The Surf” by winning the $100,000 Generous Portion Stakes in race 6. Coming off a maiden special weight score on Del Mar’s Opening Day, the athletic bay daughter of Freshman Stallion Smiling Tiger was looking to tackle a tough field including the heavily favored Stakes winner, Show It N Moe It.  As the starting gate sprung open, jockey Joe Talamo made sure to hustle Spiced Perfection out of there and secure a nice position close to the lead. Talamo kept the filly in a real good spot through the opening quarter, sitting right off pacesetters Little Doe and odds-on favorite Show It N Moe It. As they approached the turn, Spiced Perfection engaged and passed Little Doe and was taking dead aim on the favorite. With Talamo riding confidently, Spiced began to engage the leader while leaving the turn and when they hit the stretch she began to inch away from the favorite and had all the momentum. Spiced Perfection began to draw away from the field as she hit mid-stretch as Show It N Moe It began to weaken. Family Girl was trying to make a late charge from 3rd, but was repelled in deep stretch and Spiced Perfection crossed the wire a comfortable 2 lengths in front of her to secure the Stakes victory. 1-2 favorite Show It N Moe It was another 6 1/4 lengths back in 3rd.

Spiced Perfection has now amassed $110,280.00 in her brief career while winning 2 of her 4 starts to go along with a 2nd and 3rd place finish in her other outings. She will now be pointed to the $200,000 Golden State Juvenile Stakes on Breeders Cup Friday. Congratulations to all the excited Dare To Dream Stable Partners who are enjoying a fantastic ride with this young filly. Winning two races at a Del Mar meeting, let alone a Stakes race, is no easy feet for sure. Kudos to trainer Brian Koriner and his entire staff on a terrific job conditioning “Spicey”, and for seeing improvement in each of her four starts. “Smoking” Joe Talamo has ridden Spiced Perfection just masterfully in her last two starts. Congrats to Joe and we’ll look for the trifecta in her next start!

07/19/17 | Del Mar, CA – Opening day at Del Mar is a celebration of beauty, fashion, and of course… horses. Dare To Dream Stable’s 2 year-old filly Spiced Perfection gave her connections another reason to celebrate with a beauty of a performance in winning Del Mar’s 9th race on a glorious, sunny opening day! With a crowd of over 40,000 enjoying the opening day festivities at the track “where the turf meets the surf”, Spiced Perfection was all business in the sun-splashed paddock and in the post parade. She never raised a hair and was professional as could be in front of the massive crowd. Spiced Perfection had suffered from troubled trips and disadvantageous outside post draws in her previous 2 races. A little luck finally came her way for today’s race as she ended up further toward the inside in the four hole. As they gate latches sprung open, Jockey Joe Talamo hustled “Spicy” out of there to avoid any traffic issues or wide trips in this 5 furlong dash and put the good-looking daughter of Smiling Tiger into a nice stalking position. The leaders, Helen’s Tiger and Got an Obsession, set the pace through an opening quarter of 22.74 with Talamo stalking from 3rd just 2 lengths off the pair and near the rail. Approaching the turn, Talamo guided Spiced Perfection out into the 3 path where he started to creep up on the leaders. At that point Got an Obsession was beginning to put away Helen’s Tiger who was getting a little leg weary, and it was “game on” as Spicy moved up to engage the new leader. The pair were on even terms at the top of the stretch until Talamo shook the reins and Spiced Perfection gained the lead. Got an Obsession proved to be a tough customer and didn’t go away quietly fighting back, but in the end Spiced Perfection under left handed urging was too tough crossing the wire in front by a half length in a final time of 59.55. It was almost 5 lengths back to the 3rd place finisher and early leader Helen’s Tiger.

Spiced Perfection now has a record of one win, a second, and a third in her three career starts with earnings already over $53,000 in her very young career. Congratulations to all the Dare To Dream Stable partners, many whom were in attendance to celebrate this thrilling victory at one of the most historic race tracks in the country. It was a fantastic training job by Brian Koriner, who was very confident Spicy would come through with a victory. Kudos to Brian and his team on a job well done and for maintaining his outstanding record for Dare To Dream Stable at Del Mar with 4 wins in 5 starts. Congrats to jockey Joe Talamo who rode our filly with confidence knowing all he needed was a clean trip to get the job done.

Sorry, no posts matched your criteria