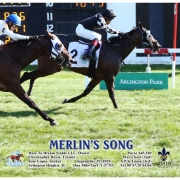 09/19/20 | Arlington Heights, IL – Dare To Dream Stable’s 4 yr old gelding Merlin’s Song proved every step of the way that he was best on this day. The son of Magician (IRE) was coming off a pretty good effort in his previous race, but it was time for him to get back to his winning ways. Merlin’s Song drew the rail in this field of eight other turf allowance competitors.

Regular rider Jose Lopez was aboard Merlin for the third straight start, and was given instructions to hustle Merlin out of the gate to either get the lead or secure a nice stalking position. When the gate sprung open, Merlin was able to get the lead rather easily with no one else really wanting it. From that point it was Jose Lopez’s job to try and control the pace while saving enough for the anticipated stretch duel. Jose did a nice job on the lead as he had Merlin on the lead through an opening half mile in 49.11 while keeping his closest pursuer 1-2 lengths at bay. As they reached the bend, Merlin was confronted on the outside past the 3/8th’s pole by War Chest. Merlin was not fazed as he turned him away and held off all the other closers to cross the wire with a 1/2 length to spare in a final time of 1:37.93 on a turf course rated good.

Congratulations to all our Dare To Dream Stable partners! This was Merlin’s 2nd win out of three starts at the abbreviated Arlington Park meet. It was his third career win to go along with 2 seconds and 3 thirds with earnings of $76,521. It was a fantastic training job by Chris Davis, Mynor Ortiz, and the entire team as Merlin has really started to flourish this summer. Finally Congratulations to Jockey Jose Lopez who is having a fantastic meet and becoming a jockey that is pretty tough to get past once he gets on the lead!

Coady Photography Star of Kodiak wires the field at Arlington Park in race #9 on 09/24/20!
Scroll to top