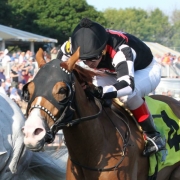 08/10/18 | Arlington Heights, IL – Dare To Dream Stable’s 4 yr old gelding Memory Bank gutted out an exhilarating, head-bobbing allowance victory in front of a large sun-soaked crowd at beautiful Arlington Park in race 5 today. This race was originally carded for the turf, but overnight rain forced management to take the 1 1/16 mile contest over to the main Polytrack surface. While there were a few scratches, it was still a very strong group of five allowance runners heading to the starting gate. Memory Bank broke well and jockey Mitchell Murrill was able to get the the chestnut son of Misremembered to settle just off the pace while in between horses. The half mile was run in 48.40 with Memory Bank just a length off the front running leader Happy Wanderer and the rest of the compact field all within three lengths. Memory Bank prompted Happy Wanderer through the 2nd turn and met him on even terms at the quarter pole. Murrill shifted Memory Bank to the outside of the leader and put that foe away for good near the sixteenth marker. Bold Rally and jockey C.H. Marquez were mounting their late charge while bullying their way through traffic. A showdown to the wire was about to ensue and Memory Bank was going to have to stave off that hard charging gray in deep stretch. Bold Rally had charged up to Memory Bank to get on even terms and looked like he would roll on by with all the momentum.  Memory Bank was ready for a battle however and as soon as he saw his challenger he dug back in for the fight. The two foes were head bobbing in the final yards, each nose getting in front for a brief moment. In the end, Memory Bank was able to reach out in the last strides and get his nose in front at the wire in an exhilarating finish! The victory put “The Bank’s” earnings to $129,998. He now has 4 wins, 5 seconds, and 2 thirds in his 14 starts.

Congratulations to all the Dare To Dream Stable partners, many of whom were in attendance for the heart pounding finish. Once again trainer Mike Stidham and his entire team did a fantastic job with Memory Bank and have kept him in great form over the past two years. Finally kudos to jockey Mitchell Murrill who did a fantastic job throughout the race keeping the main threats hemmed in while being in a great spot. When it was time to push the “go button” Mitchell timed it perfectly and then out finished Bold Rally.