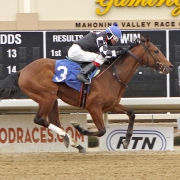 02/26/19 | Austintown, OH – Dare To Dream Stable’s homebred He’s No Bull took an allowance field virtually wire to wire in capturing the second victory of his young career. Coming off a solid effort at Laurel Park in his previous start where “The Bull” almost took them wire to wire before getting caught in the final 50 yards and finishing 3rd losing by 3/4 lengths. He’s No Bull had been training terrific coming into this race, and was sitting on this type of performance. “The Bull” broke sharply when the gate sprung open, and jockey T.D. Houghton sent the bay son of Haynesfield straight out to the front through the first turn. On the backside, long shot Machinist was intent on getting to the lead and was hustled up by his jockey to get right up next to He’s No Bull and actually putting his nose in front for a brief moment. Jockey Houghton did not panic and sat chilly on his mount, while Machinist’s jockey was having to really get after his horse to keep up with He’s No Bull. Eventually right before the final turn, Machinist had enough and Bull would now have to repel some new challengers from off the pace. As Houghton cut the corner around that second turn and into the stretch, he was now engaged by race favorite Humble Hansen who got within 3/4’s of a length from “The Bull”, but again the athletic gelding was able to fend off that challenge as he approached the deep stretch. The only thing left to do was hold off the closing Arazi Like Move, and He’s No Bull easily fended off that foe to cross the wire in a measured 1 3/4th’s clear of that rival. It was another 2 3/4 lengths to the 3rd place finisher. This was He’s No Bull’s 2nd victory in his 8th start. He also has two 3rd place finishes to go along with those wins, and total earnings of $29,415.

Congratulations go out to all the Dare To Dream Stable partners on this nice allowance win. It was a fantastic training job by Danny Werre who tinkered a bit by taking the blinkers off “The Bull” for the first time, and it sure paid off. Kudos also go out to Charlene Schenck-Werre who does a fantastic job along with Danny in getting all the stable’s horses ready for their best efforts. We always appreciate a good ride, and jockey T. D. Houghton gave us just that! He rode He’s No Bull with total confidence and never panicked when he was being pressured by a few of his rivals at different stages of the race.