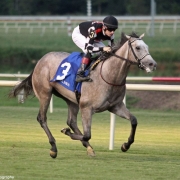 09/07/19 | New Kent, VA – Dare To Dream Stable’s ultra-talented 2 yr old colt Embolden once again dazzled and easily put away a field of 9 Virginia Breds in the 100k Jamestown Stakes going 5 1/2 furlongs on the turf at Colonial Downs. On paper, this appeared to be a two-horse race with Embolden and the ballyhooed filly Bella Aurora. The latter had scored a super impressive victory against open company in a turf sprint at Laurel Park last run. Embolden was coming off the easiest of victories in his turf bow last month, winning by over ten lengths. So as expected, this gray son of The Factor would go off as the heavy favorite in his stakes debut. As it turned out, they would run 1-2, but on this day it was all about Embolden who was once again the easiest of winners.

Once again when the gates opened, Embolden was quickest and immediately went to the lead with jockey Trevor McCarthy aboard for the first time. He cruised through an unhurried opening quarter in 22.72 while maintaining a short edge with McCarthy just sitting on the classy gray colt. Like his previous race, The Gray Camanoe tried to take it to Embolden early and once again he shook off that rival with ease as he began to open up on the field. As they straightened for home, there was only one order of business to clean up, and that was to fend off the challenge of Bella Aurora who’s connections must have been hoping that the early pace pressure would take its toll on Embolden and they could surge past in the stretch. Unfortunately for them Embolden had plenty left in the tank, and when the 5-2 second choice tried to move up and engage with “Big E,” McCarthy just shook the reins a bit and easily spurted away without ever being challenged. In deep stretch, McCarthy just sat on the classy champ as he continued to widen his lead and coasted under the wire by 3 3/4 lengths in a final time of 1:02.80. It was another 7 1/4 lengths to the 3rd place finisher showing how much the best the top two were, and more astoundingly how much the best Embolden was. With this victory earning him $60,000 Embolden has now made $99,000 in his brief 3 race career. To go along with his 2nd place dirt debut, Embolden is now a perfect 2 for 2 on turf and has a very bright future. It looks like it’s time to test the waters in open stakes company and see if he can take us to the Breeders Cup!

Congratulations to all the happy and excited Dare To Dream Stable partners. With good reason, there is excitement to see where this journey goes next. Kudos to trainer Michael Stidham, Hilary Pridham, Ben Trask, and the entire team. They have been high on Embolden from day one, and he continues to dazzle and improve with each start. Finally to jockey Trevor McCarthy who rode the colt for the first time, but you would never know as he was in complete command from the onset and was all smiles after the race. He compared riding Embolden to driving a Ferrari and said there is still much more in the tank as he never even got close to putting him in full gear.