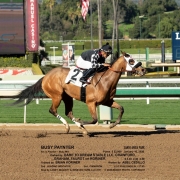 01/10/20 | Arcadia, CA – Dare To Dream Stable’s Busy Paynter continued the stable’s nice run to start the new year with a very easy front running victory at Santa Anita Park. Busy Paynter was coming off a fourth place effort in her previous start against tougher company but losing by only 1 1/2 lengths. This time around the bay daughter of Paynter would go off as the odds on favorite. When they left the gate, Busy Paynter and jockey Abel Cedillo who was riding the filly for the first time shot to the lead. They set an opening 1/4 mile fraction of 22.48 while gaining a 1 1/2 length advantage. With Cedillo sitting chili on “Busy” they maintained that advantage through the half mile while the jockeys behind were really getting after their mounts. When they turned for home, Cedillo switched Busy Paynter off the fence a bit for the stretch run. With each and every stride, Busy Paynter began to widen the margin and in deep stretch was a commanding 4 lengths up on her nearest competitor. From that point Cedillo just eased up on the filly as she coasted to an easy 3 3/4 length victory stopping the clock in 1:17.83 for the six and one half furlongs. This was Busy Paynter’s third career victory in nine starts which also include a third place effort. She has now earned $38,181 in her career.

Congratulations to our great partners on this victory. Always nice to be in the winner’s circle with that great backdrop of the mountains at Santa Anita. It was another fantastic training job by Brian Koriner and his team, as they have kept Busy Paynter happy and healthy. Finally to jockey Abel Cedillo who was riding for the stable for the first time. He rode Busy Paynter like he knew he was on there best horse and never gave the competition a chance as he made it look easy!