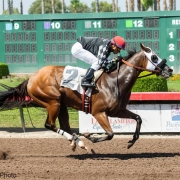 09/21/19 | Los Alamitos, CA – Dare To Dream Stable’s 3 yr old filly Busy Paynter put it all together and easily dispatched her five rivals in breaking her maiden by a resounding 7 lengths at Los Alamitos Race Course. “Busy” was coming off a disappointing performance last time out in which she ran into a runaway winner, but didn’t finish the way she was expected to. With that in mind, Busy Paynter was wheeled back in 8 days for this six furlong sprint. With jockey Tiago Pereira back aboard, the good looking bay daughter of Paynter was expected to track the pacesetter Colonel Power, and hopefully, take over in the stretch. When the gates popped open, “Busy” as expected stalked the speed while going a snappy 21.77 for the opening quarter. As they approached the half mile marker, Pereira asked Busy Paynter a bit earlier than expected as he noticed Colonel Power starting to back up. As they completed the half mile in 45.32, Busy Paynter was now on the lead. She then started to kick it in around the bend and steadily begun to draw away in the stretch. Once they were in deep stretch, Pereira just hand urged Busy Paynter to the wire in a snappy time of 1:09.84 with a winning margin of 7 lengths. This was Busy Paynter’s first victory to go along with one third-place finish in 5 career starts and earnings of $15,211.

Congratulations to the partners on this resounding victory! It was a really nice training job by Brian Koriner who has always had confidence in “Busy” and finally got it all out of her. Brian looks forward to continued improvement from this up and coming filly. Kudos to jockey Tiago Pereira on a fantastic ride. He pushed all the right buttons and really took it to the field!