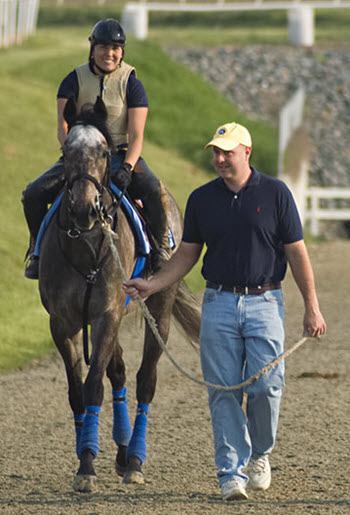 Mark was born in July 1970 in Akron, Ohio. He’s a second-generation trainer, having grown up in the business under his father, trainer Joseph Shuman. Mark is a University of Miami (Ohio) graduate, with a degree in exercise physiology. While obtaining that degree, he always knew that his heart was leading him to follow his father in training racehorses.

Aside from the wealth of knowledge Mark gleaned from his father, he also learned the nuances of the trade from his time spent as an assistant trainer to the likes of Tom Skiffington, Howard Tesher and H. James Bond on the NYRA circuit. At the end of 2000, Mark decided that the time was right to setup shop on his own and took out his trainer’s license. Through the end of 2013, Mark has racked up over 1,000 wins and over $29,000,000 in career earnings while training such top horses as Xchanger, Talent Search, Tasting Champagne, My Girlie, Echo Quest & Tsarmina. In 2003, he shattered Gulfstream Park’s single-season victories mark by a trainer when he saddled 87 winners during the 2003 winter-spring meeting.

Mark handles the training of Dare To Dream Stable’s east coast runners and is stabled at the beautiful Fair Hill Training Center in Elkton, MD